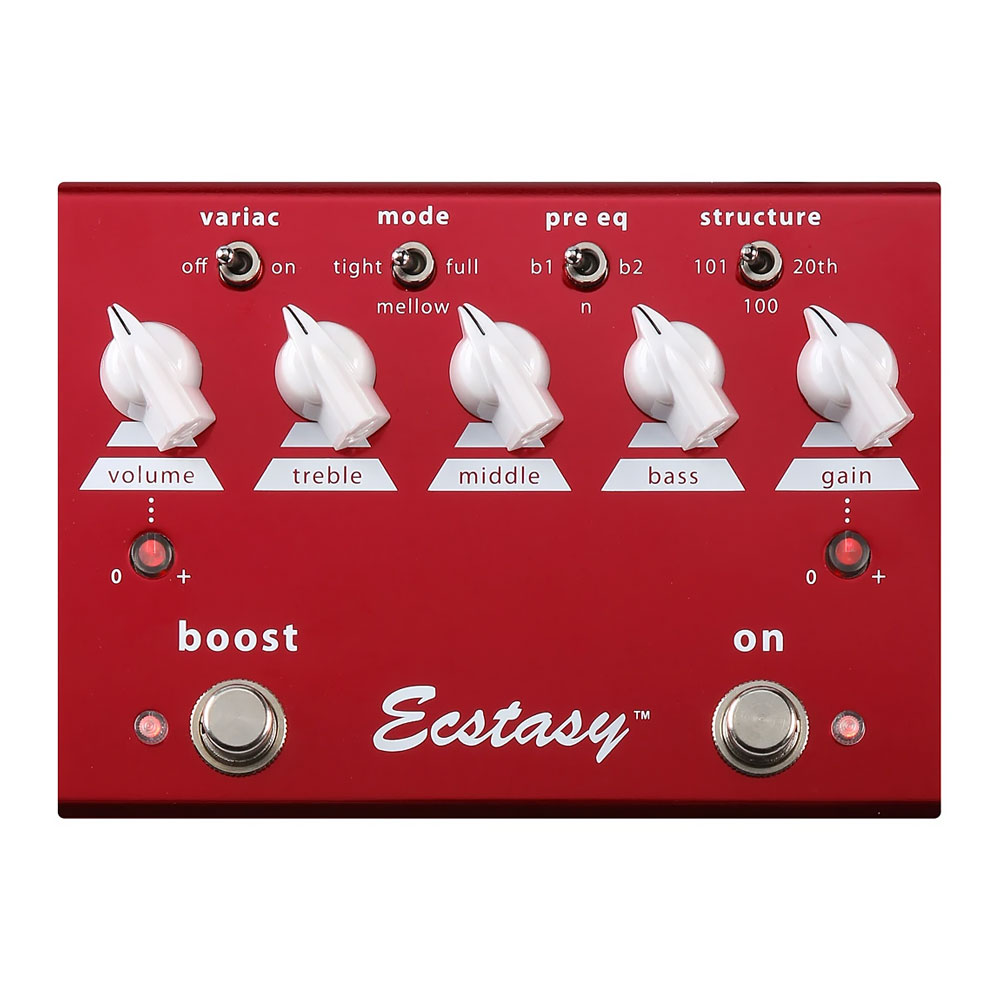 The amp like circuitry is designed with five discrete Class A gain stages and with no op-amps or diode clipping, this revolutionary approach provides clarity, touch sensitivity and note separation never before achieved in overdrive pedals. Featuring full three band EQ controls, volume and gain controls with independent volume and gain for the boost (the mini control knobs are illuminated when the boost is engaged) and four tone tweaking switches:

The 'Variac On/Off' switch adds a dropped voltage dynamic compression to the feel and sound.

The three position 'Mode' switch shapes the general EQ curve and gain levels, 'Tight' offers higher gain with a focused low end and with increased mids and high, 'Mellow' has the lowest gain with a darker overall tone and 'Full' gives a gain boost with an open less focused low end.

The three position 'Pre EQ' switch controls the openness and presence of higher range harmonics, 'B1' gives a high frequency boost that adds detail and openness to the sound, 'N' is a neutral tone what is rounder with less attack and 'B2' offers a boosted midrange and high frequency (B1 and B2 have less effect on the tone with high gain settings).

The three position 'Structure' switch gives EQ shifts and gain structures from various eras and models of Ecstasy amplifiers, '101' is a good vintage tone with a wider bass and treble response and less midrange, '100' has a more focused tone with less highs and bass but with a detailed and rich midrange and '20th' offers a modern sound with a boosted mid and high frequency.

The Ecstasy red is powered by a standard 9V battery or power supply, the advanced circuitry internally elevates the voltage to a higher level to provide a greater dynamic range which closely resembles the feel of the Ecstasy amplifier's legendary tube design, there is a low battery indicator built in as well, once the battery voltage drops below a useable threshold all the LEDs will start blinking and then the pedal will be bypassed. The remote TRS jack socket allows switching of both the pedal and boost function on and off via a remote switching unit.