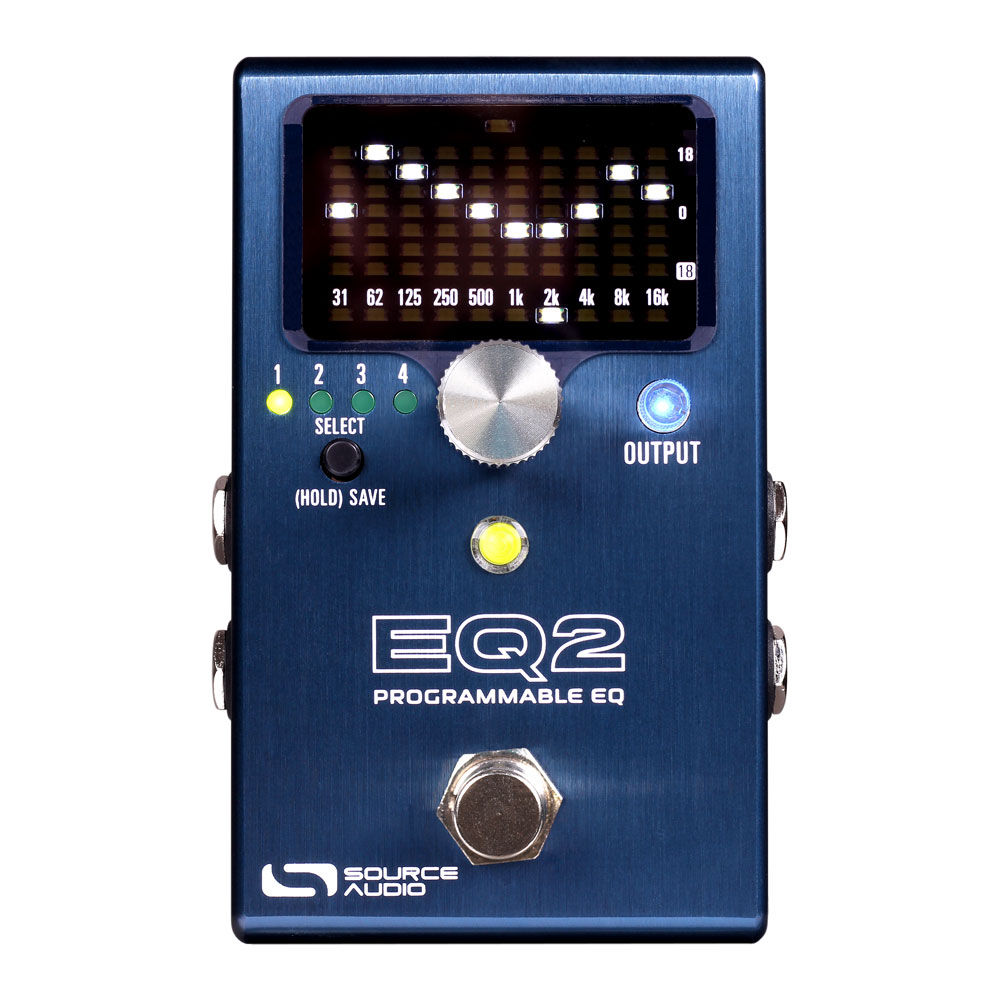 The Source Audio EQ2 Programmable Equalizer Pedal is a powerful, compact and advanced equaliser pedal, with a combination of graphic and parametric equalisers with 10 fully adjustable frequency bands, stereo ins & outs, MIDI In and Thru jacks, 4 or 8 on board presets, 128 MIDI accessible presets, up to 12dB volume boost, built in tuner and the ability to simultaneously run two separate EQ settings in stereo.

The availability of the full audible frequency spectrum across 10 completely customisable bands means it works great with guitar, bass and keyboards, each of the 10 bands can be moved to any point on the frequency spectrum from 20 to 20,000Hz and then boost or cut 18dB, the Q factor (width) can also be adjusted for each band. Your settings can be saved as one of 4 on board presets by default or up to 8 by using the preset extension mode (turned on via the free Source Audio Neuro app). The volume of each preset can also be saved with a boost of up to 12db for either a transparent volume boost or to push the front end of the amp for a natural breakup. Each preset is easily recalled via the footswitch scrolling function, simply hold down the footswitch and the pedal will scroll through each preset then release the footswitch at the desired preset, or you can cycle through them using the preset select/save button.

The pedal has stereo input and output jacks which run the same EQ setting by default but can also be switched to 'split mode' allowing two separate EQ settings to be run at the same time, one in each channel. With MIDI in and thru jacks, MIDI messages can be used to engage/disengage the pedal, recall up to 128 presets, move parameters with a MIDI expression controller, and more. The 3.5 mm 'control input' port allows connection to external control devices such as the Source Audio Tap Tempo Switch, Source Audio Dual Expression Pedal, Neuro Hub, and Hot Hand Motion Controller. The tap tempo switch can be set up to cycle through presets and one clever option with this is combining it with split mode used for stereo channels but in mono mode, it can then be used to switch between channel 1 and 2 giving two separate EQs per preset. The Dual Expression pedal can control up to four different parameters on the EQ2 per preset, mapping it to Output control would allow it to act as a volume pedal or it can be used to automate the sweep and bandwidth of some mid-range frequencies to simulate a wah effect.

Most functions on the Source Audio EQ2 are accessed and adjusted via the simple rotary encoder knob but you can also access more complex functions in the pedal without needing to open the app by going in to the 'options menu' this allows adjustment of: gain (per channel in split stereo mode to balance the output of the two channels), a limiter to prevent digital clipping, a noise gate with adjustable threshold from -100dB to -60dB, an independent input high pass filter that is adjustable from 10Hz to 80Hz, a shelving filter option for bands 1 & 10, switching from default parallel filters to cascading series filters and a number of switching and control port options. Further advanced editing and organising of EQ presets as well as access to a library of ready to use presets is provided by the free Source Audio Neuro app and desktop editor, you can connect the EQ2 pedal to a Windows PC or Mac with the included USB cable and connect it to the headphone jack of your phone using the included 1/4" to 1/8" TRS cable, the firmware can also be updated via the USB port. The deep dive editing functions make the Source Audio EQ2 Programmable Equalizer a powerful pedal and the numerous on board features and simple controls give it out of the box usability, all wrapped up in a compact and rugged enclosure.