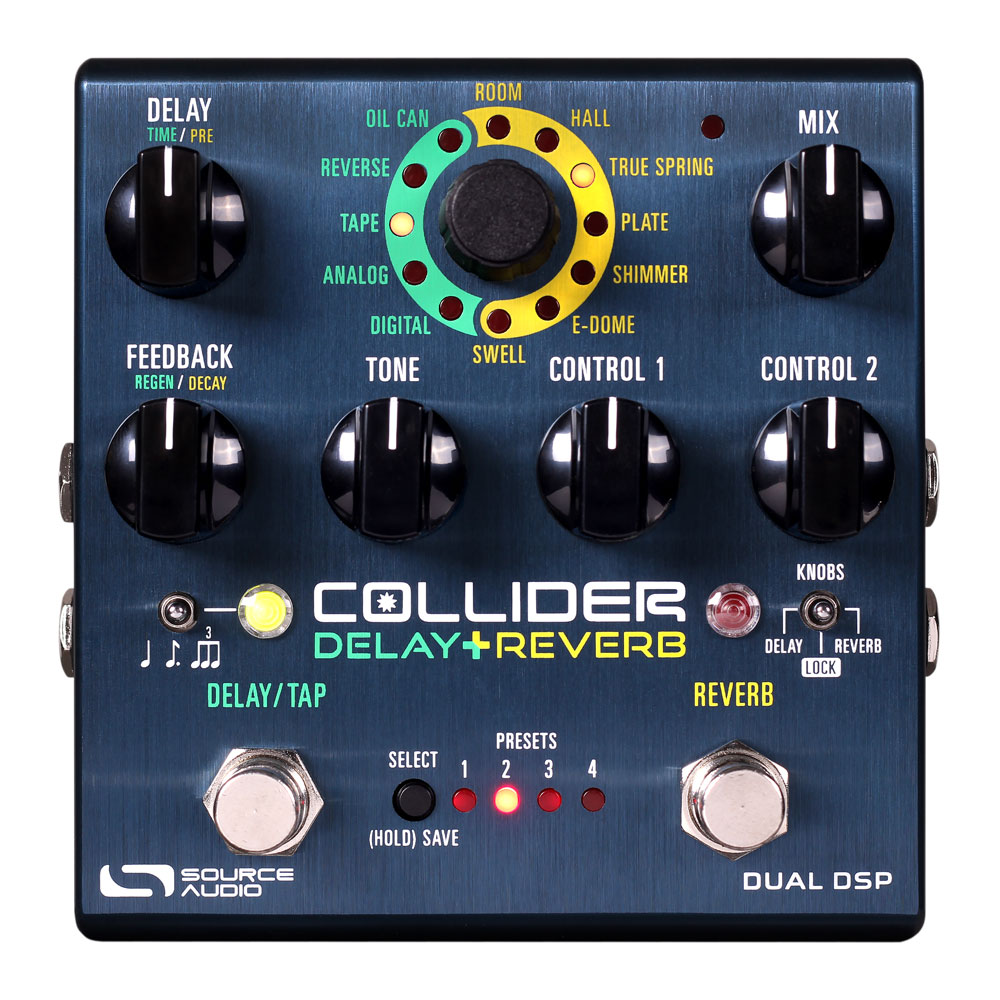 The Source Audio Collider Delay & Reverb Pedal is an incredibly powerful 2 in 1 pedal with 12 on board effects handpicked from their Nemesis Delay and Ventris Reverb pedals allowing both delay and reverb effects to be used at the same time or even two delays or two reverbs. Featuring stereo ins & outs, MIDI In and Thru jacks, 4 or 8 on board presets and 128 MIDI accessible presets.

The Collider contains two completely independent processors, essentially housing a pair of high powered pedals in a single box, delay and reverb can each be run on their own, cascading (delay in to reverb), together in parallel or even split with one effect going to each of the stereo outputs (independent stereo paths is set up in the editor/app). The Collider offers an exceptional collection of rich, spacious tones, including realistic reproductions of vintage analogue, tape and oil can delays, classic spring and plate reverbs, hall/room reverbs with natural replications of large and small acoustic spaces and an intriguing and highly musical selection of 'unnatural' tones including reverse delay and shimmer reverb. Individual footswitches for delay and reverb toggle each effect on and off at will, quick tapping the delay footswitch provides a tap tempo function and holding the reverb switch gives infinite reverb.

The tone of the effects can be easily sculpted with the delay (time/pre-delay), mix, feedback (regen/decay), tone and control 1 and 2 knobs. The delay knob adjusts the pre-delay for reverb effects (the amount of time between the dry signal and the initial reverb reflections) or the time for delay effects (delay time/speed of the repeats), the feedback knob adjusts the decay for reverb effects (sustain time of the reverb trail) or the regeneration for delay effects (amount of delay repeats), the control 1 and 2 knobs adjust different parameters based on the reverb or delay effect selected (spring length, bass, modulation depth, modulation rate etc.). Whether the knobs are adjusting the delay or reverb effect is controlled by the 'knobs' switch, select either delay or reverb to adjust those effects and set it to the central 'lock' position to stop the knobs being adjusted unintentionally. Your settings can be saved as one of 4 on board presets by default or up to 8 by using the preset extension mode (turned on via the app), each preset is easily recalled via the footswitch scrolling function or you can cycle through them using the preset select/save button. A handy indicator is built in to let you know the saved position of a knob for any preset, simply rotate any knob until the control LED (LED next to mix knob) blinks twice and you've reached the knob's preset position.

A full breakdown of the 12 on board effects is as follows,

The pedal has stereo input and output jacks and MIDI in and thru jacks, MIDI messages can be used to engage/disengage the pedal, recall up to 128 presets, move parameters and more. The 3.5 mm 'control input' port allows connection to external control devices such as the Source Audio Tap Tempo Switch, Source Audio Dual Expression Pedal, Neuro Hub and Hot Hand Motion Controller and a 1/4" 'pedal in' jack also allows the use of an expression pedal or footswitch. The tap tempo or other single/dual footswitch can be used to scroll through presets or input a tap tempo and expression pedals can be set up to control up to three different parameter knobs (and the mapping can be stored as part of a preset). Advanced options and editing and access to a library of ready to use presets is provided by the free Source Audio Neuro app and desktop editor, you can connect the Collider pedal to a Windows PC or Mac via the USB port and connect it to the headphone jack of your phone using the included 1/4" to 1/8" TRS cable, the firmware can also be updated via the USB port. The deep dive editing functions and dual processor capabilities make the Source Audio Collider Delay & Reverb a powerful pedal and the numerous on board features and simple controls give it out of the box usability, all wrapped up in a compact and rugged enclosure.