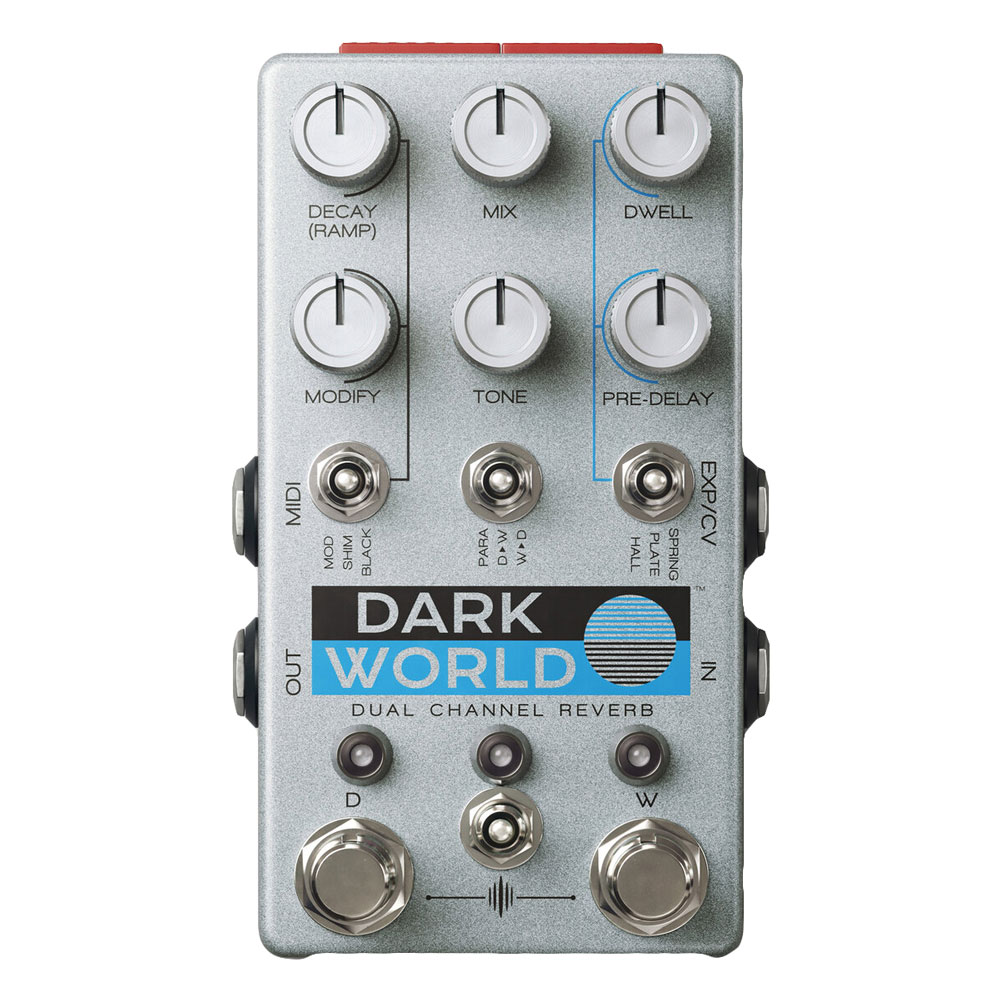 The Chase Bliss Audio Dark World Dual Channel Reverb Pedal is a collaboration with Cooper FX and Keeley Electronics, it is a dual channel pedal with three reverb styles per channel including hall, plate, spring and shimmer, the channels can be routed together in parallel or series (up to 33 different combinations) and features expression and CV control, MIDI control and deeper options through their dip switches.

The 'Dark' channel (left footswitch) was developed with Cooper FX, the left toggle switch selects between its three reverb types: Mod, Shim and Black and the Decay and Modify knobs control the effect as follows:

The 'World' channel (right footswitch) was developed with Keeley Electronics, the right toggle switch selects between its three more traditional reverb types: Hall, Plate and Spring, the Dwell knobs sets the intensity of the reverb and the amount of time it takes to decay and the Pre-Delay knob controls the amount of space between the initial note attack and when you start hearing reverb reflections (from 0 ms to 200 ms).

The two reverb channels can be used on their own or both together and the routing is controlled by the central toggle switch, the can run parallel to each other or cascading series with the dark channel first in to world or world first in to dark. The Mix knob controls the ratio of dry to affected wet signal from 100% analogue dry signal to 100% wet. The tone control affects each channel differently, the dark channel features a slightly resonant low pass filter in all three reverb modes and the world channel employs a gentler more traditional low pass filter with the spring program having a slighter darker top end than hall and plate. The dark channel decay knob can by changed with the dip switches to control the ramp time of any of the other five knobs, the ramping can go up and down or ramp and hold (bounce dip switch).

The Chase Bliss Audio Dark World Dual Channel Reverb Pedal can save and recall two presets (toggle switch between footswitches) and has their top mounted dip switches for deeper editing control over parameters like ramping, buffered bypass to preserve trails, momentary engage for the channel footswitches and sweep direction and range for expression pedals. The pedal has a 1/4" EXP/CV input jack for a TRS expression pedal or control voltage (for CV use a TRS cable with the ring floating), this can be used to control all five knobs individually or together (each selectable via dip switches), there is also a 1/4" MIDI input jack for plugging in an external footswitch (controls the left pedal footswitch) or to connect Mood to the Chase Bliss Midibox (not included) for MIDI control over all parameters (except dip switches) e.g. engage each channel, select reverb modes, save/load presets etc. and MIDI increases the number of presets available to 122. Here at Glued to Music we like the blend of more traditional reverb types on the right channel with more modern ambient style effects on the right channel and being able to use both at the same time really opens up the possibilities of one pedal.