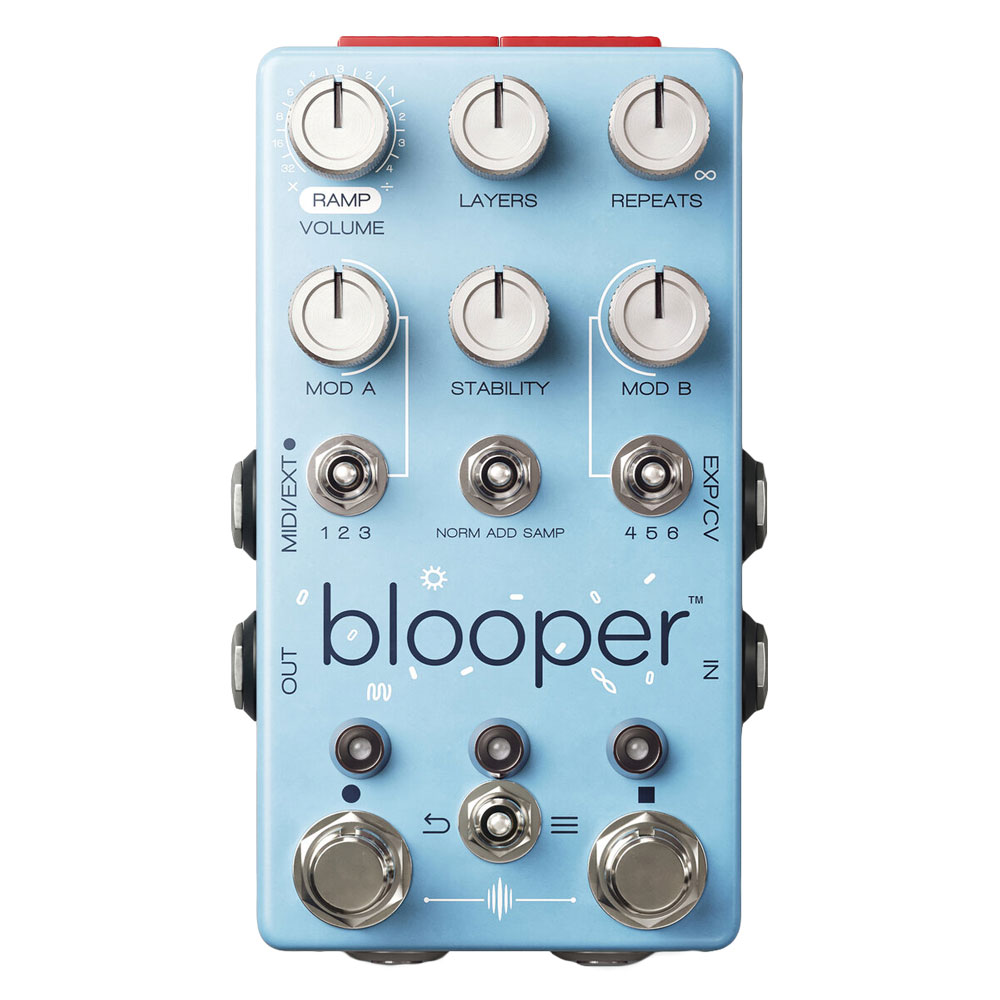 The Chase Bliss Audio Blooper Pedal is a looper but also much more, with up to 12 on board effects that can be applied to your loops 8 layers deep and 16 loops can be saved and recalled with layers preserved. It has expression and CV control, MIDI control and deeper options through their dip switches.

The pedal has three looping modes accessed through the toggle switch in centre: Normal, Additive, Sampler, normal is like a standard looper, record a loop and then overdub a new part up to eight times, there is no recording of the effects in normal mode, you can hear them during recording and playback (and so could be recorded using a mic on a cab) but once the effect is turned off it is just the dry signal saved in the pedal, additive mode records the effects on to the loop and really opens up the creative possibilities of Blooper (leave the pedal recording and every time the loop repeats everything will be fed back through the effects again letting things get a little weird if you want) and in Sampler mode there is no overdubbing, every time a loop is recorded it replaces the previous loop (you can record layers in additive mode and then switch to sampler mode and it will bring the layers with it) and the right footswitch can be set to trigger one playback of the loop (every press will trigger the sample again). In normal/additive mode recording and playing the loops is done by tapping the left footswitch but holding it will start the one shot recording, this will record for one full loop and then stop recording (this is really useful for adding an effect to the whole loop without needing to start and stop recording in time with the loop), holding the right footswitch will enter undo/redo mode, tapping the right switch will then undo the layer just recorded and tapping the left switch will add it back (you can sequentially undo/redo all eight layers), this is duplicated in the Layers knob where turning it anticlockwise will go back through the layers. In sampler mode holding the left footswitch will record a sample for as long as the switch is held down.

The pedal has two channels of on board effects/modifiers (Mod A and B) each with their own set of controls: the 'arcade' style switches at the bottom of the pedal (on the vertical side below the footswitches) have on/off and momentary function (applying the modifier only while the switch is being held), the Mod knobs control the effect amount (with different behaviours when turning clockwise or anticlockwise from the neutral 12 o'clock position) and the toggle switches select between three modifiers for A and B each for six effects accessible on the front of the pedal, the dip switches allow for a second bank of modifiers for each toggle switch giving 12 possible on board effects, new modifiers can be added to any bank or position using the Chase Bliss Blooper Interface website (connect the pedal to a computer with the included USB cable), there is currently 16 modifiers to choose from.

A breakdown of the six default on board modifiers in order is as follows (future firmware updates may include extras in the banks or reorder these):

In addition to the modifiers is the Stability knob, this introduces an analogue vintage feel to the sound with wow, flutter, noise and filtering, stability was specifically tuned for additive overdubbing so that you can gradually wear out your loop over time by recording it repeatedly. The Repeats knob allows layers to gradually fade away at a speed of your choosing, the further counter-clockwise repeats is set the faster previous layers will fade away while recording. This can actually be used to set up Blooper as a delay pedal, record a blank loop like using tap tempo to set the delay time, then start recording a new layer and play over it, the repeats knob will act like a feedback control on a delay pedal adjusting the decay time of the repeats (mix in some stability and it sounds like a tape delay). The Volume knob is unity at noon but can boost to around 2x volume or the dip switches can change it to control the ramp time of effects being added to a loop, the ramping can go up and down or ramp and hold (bounce dip switch), the ramp time can also be synced to the loop length to keep the movement the same (sync dip switch).

The Chase Bliss Audio Blooper Pedal has a 1/4" EXP/CV input jack for a TRS expression pedal or control voltage, this can be used to control the layers, repeats, stability, mod A and mod B knobs individually or together (each selectable via dip switches and there's also extra control options on the dip switches like sweep direction and range), there is also a 1/4" MIDI/EXT input jack for plugging in an external footswitch (controls the left pedal footswitch) or to connect Blooper to the Chase Bliss Midibox (not included) for MIDI control over all parameters (except dip switches) e.g. start/stop recording, modifiers on/off, save/load loops etc. Ok this was a long one, the pedal melted our minds here at Glued to Music when learning about it, while there is a huge amount that can be done with the pedal the basic functionality is simpler than it first looks, giving an intuitive pedal with endless creative possibilities.