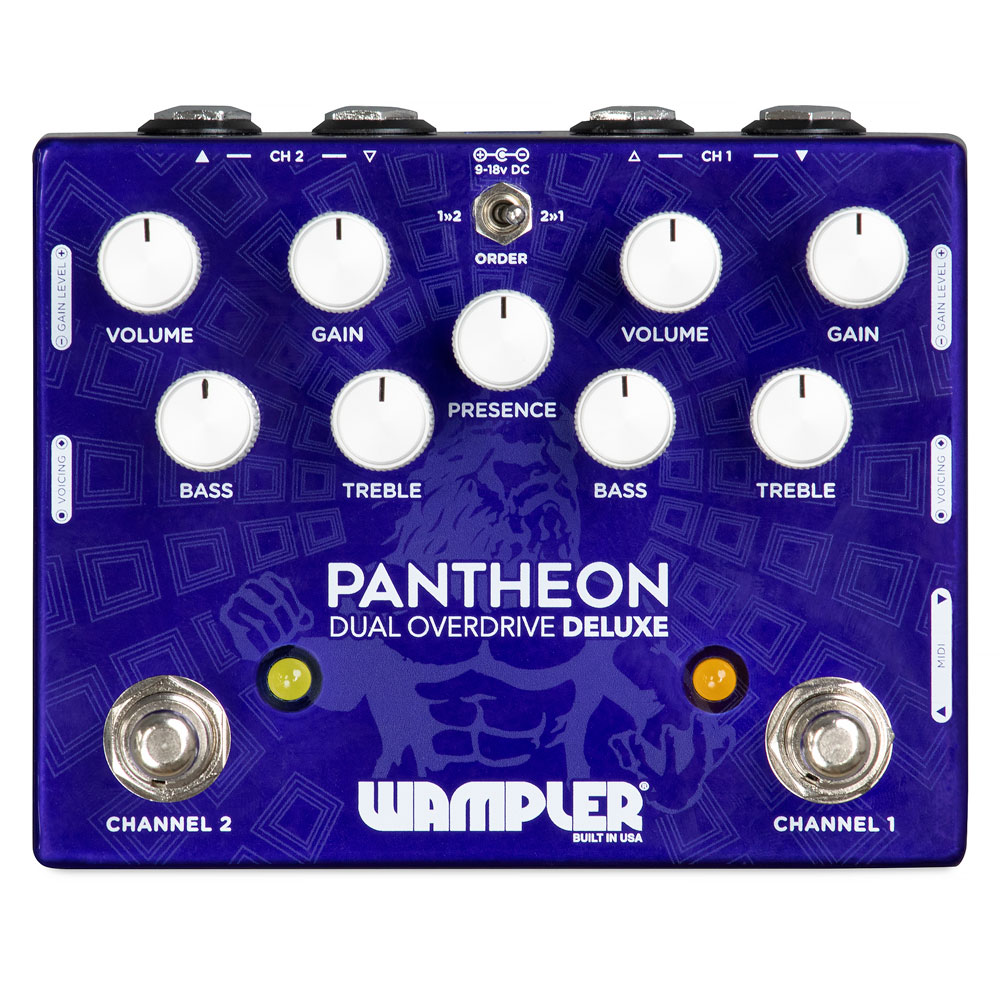 The Wampler Dual Pantheon Deluxe Overdrive Pedal is based on the discontinued Marshall BluesBreaker pedal with its famed transparent overdrive, building on their popular Pantheon pedal the Deluxe adds a second stackable channel with independent controls as well as MIDI control and multiple routing options.

The reason the original BluesBreaker circuit is so legendary, and why so many other pedals have been modelled after it, has to do with the way it introduces harmonics and grit into your tone without altering its natural sound or drowning the player's touch in needless extra compression. The Pantheon Deluxe expands on the original with extra tone controls, voicing options and gain ranges. Channel one delivers a classic Blues Breaker tone whereas Channel two is a recreation of the original Pantheon, it is Wampler's take on the Blues Breaker with a modern boutique feel. On each side of the pedal are independent gain level switches that select between low, medium and high gain options and voice switches that select between soft clipping, hard clipping or a mix of both for each channel. The two sets of Gain, Level, Treble and Bass controls allow for in depth shaping of each channel's tone (the active Bass control is neutral at noon but boasts an extremely powerful sweep as you move through the range). A global Presence control simultaneously alters each channel to add just the right amount of top end chime to suit different guitars and amplifiers giving great flexibility for playing live or in the studio (start with it all the way off and add as required).

With a footswitch for each channel you can turn either on/off or both together, combining both channels will unleash a whole new world of crisp, harmonic distortion possibilities and you can easily swap the stacking order without changing cabling via the front mounted Order toggle switch. Inputs and output jacks for each channel allow you to split each side in a loop switcher, insert a pedal or chain of pedals between each channel or even run the pedal in stereo to dual amplifiers. With the addition of 3.5 mm TRS MIDI In and Out you can now also switch the channels on and off with a MIDI switcher saving you valuable hardware loops on your loop switcher (3.5 mm to MIDI 5-pin DIN adapter included).

Delivering everything from sweet and creamy push to cranked British overdrive and distortion and now with multiple switching options and routing the Wampler Dual Pantheon Deluxe Pedal offers maximum tonal versatility while retaining all the personality and feel of your playing.